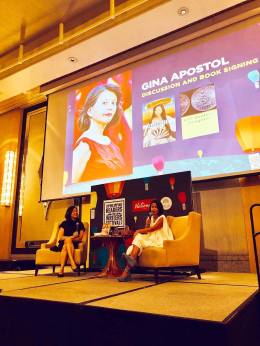 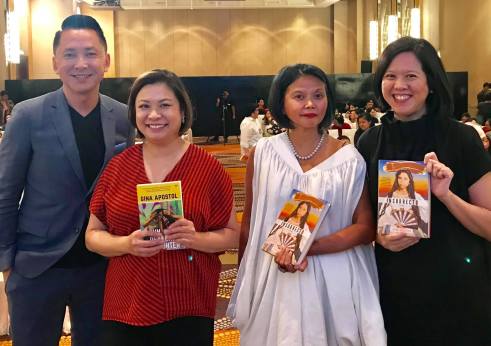 My time at National Bookstore’s Philippine Readers and Writers Festival has been rewarding, unsettling, fulfilling, destabilizing, and above all moving. It is the first time I return home only for my books (I usually return for my family). This conjoining of home with such intense focus on Insurrecto, which is a novel about a return home, creates spin in my head, the kind I perpetrate on readers. On top of this, I am deep in the writing of a novel. I’m jetlagged and in the time-free fever-dream of a first draft (actually a revision of the 266 pages of William McKinley’s World, but I have decided to junk almost all of those pages, I’m writing again from scratch). So in between my immersion in this new novel and my interviews on my old one, all enjoyable (this year of Insurrecto I made up my mind to enjoy the book events), this has been a whirl—fun, but intense. So of course I did not eat lunch on the day of my actual public event for Insurrecto—I kept working on the novel. Then I rushed to get to Ambeth Ocampo’s then Viet Nguyen’s then Butch Dalisay’s panels—all great! By the time it was 5, I was lightheaded—I was dizzy and I realized for some reason I was very very hungry. So at the end, I felt I had left gaping holes in the answers, befuddled as I was by my body. So below are some of the things I wished I had elaborated or fleshed out a bit during the discussion. I feel huge gratitude to the Philippine Readers and Writers Festival for inviting me—to the tireless employees of National Bookstore, esp JB Roperos, all of whom made the stay easy, to Xandra Ramos who led it all, to James Abuan who facilitated the prep for the events, to Raffles Hotel (for the breakfast buffets!), to Andrea Pasion-Flores who supports my books at Anvil, to Yvette for moderating the talk. The audience at this festival was wonderful—rapt, intent, intelligent, curious. Above all, they were readers reading these Filipino books. It is a gift that any book festival offers to us, to readers and writers—this gift of connection. So thank you to the festival, to all the readers and writers that I met.

One thought on “Below are some things I wish to add”