I was honored to introduce Elda Rotor, publisher of Penguin Classics, at the Kundiman gala night. Below is my speech. (Note: sadly, a few hours after the Kundiman event, an Asian American poet who attended it was harassed in the East Village by a racist who was eventually arrested. Talk about orange flames of nativist hatred.)

Mentorship is a two-way gift: both the receiver and the giver eventually possess something of value when the present is right. Perhaps empathy is the most valuable gift of the mentor: and when one mentors a writer, I think it is important to recognize that empathy has to do with understanding art’s labor—that the labor that goes into art (which for the reader paradoxically must seem imperceptible)—is intangible though intensive, arduous but unseen, and too often fraught with waste and a sense of uselessness, a sense that the future, the finished work, will never come.

Mentoring an artist is the gift of believing in the future.

In the best of all possible worlds, the publisher is art’s mentor: her task is to believe in the necessity of that intangible labor, the future of art. We know in this day, in this past week, how much more urgent the work of the publisher is—quite simply—the publisher’s job is to shape a future that will allow our species to survive.

It is terrifying to say that, but it is true.

A publisher’s mentoring job is now possibly world-altering, if the publisher gets it right.

The magician nature of a publisher’s job, a kind of sorcery prophesying the future of books was revelatory for me, when talking to my own publisher & editor: I saw how so much depends on, as they say, a red wheelbarrow, that is, on one publisher’s or one editor’s imagination: that a book might or might not come about without the contents of one stranger’s mind, a stranger’s invention of a book’s future. And if a publisher’s job is world-altering, how important is that publisher’s ability to imagine? Especially to imagine the worlds one’s specific mind does not know? The gaps in one’s imagination? To mentor books outside of one mind’s comfort and bounds?

Kundiman’s great fortune and foresight today is to honor a mentor par excellence, Elda Rotor, an editor and publisher who, in my view, has that gift of empathy for the labor of the writers Kundiman cherishes—these writers of America’s future, these various and powerful voices of Asian America that America must hear so that the project of America’s democracy might go forward with the vigor and fire of America’s historical truth, instead of the orange flames of hermetic, nativist despair.

Elda is vice president and publisher of Penguin Classics, a vanguard of the past to which our future is tethered. She has been in publishing since the 1990s, working first as an assistant then becoming an acquiring editor at Oxford University Press, before moving on to become the editorial director of the venerable Penguin Classics line. Today, she is the only woman of color in an editorial position at Penguin—this is because she is also the only person of color in an editorial position at Penguin—which does not make Penguin an anomaly; in publishing, so I understand (though my stats are not highly researched), there is perhaps only Chris Jackson, publisher of Ta-Nehisi Coates and now with his own imprint at Random House, who in Elda’s generation matches her cred.

So Elda is a unicorn. A minotaur. An entirely lovely one: so glad she is with us tonight: but her uniqueness gives pause for all of us.

I will admit that I was fascinated when I saw Elda’s name once in a book of poems—because I am a fan of Arturo Rotor, a Filipino short story writer, doctor, and scientist, who turns out to be related to Elda. I’m a fan-girl, so I looked out for Elda because of her name. And it is significant that no one in this audience likely knows Arturo Rotor, though he was a leading writer during the Commonwealth, when the Philippines was part of America. But I am happy to say that Penguin is coming out with another Filipino classic, Nick Joaquin, because of Elda: watch out for it in April 2017.

In the times I have had the luck and pleasure of speaking with Elda, my sense is that mentorship is at the heart of Elda’s life work because she came to publishing as a poet, and she remains a poet. With friends from high school and college—she grew up in Manhattan where she went to Catholic high school before studying English at George Washington University—she published her own start-up poetry journal, New Digressions, which with her three friends she created and sold kamikaze style from 1992-1997, a blitzkrieg literary affair that shows the spunk and prepossession and amazing confidence that permeates Elda’s ways of going about her life—she simply acts and does, knowing that if she did not do it, who will? Her job in the world, from the time of her youth as a poet in Manhattan, was to find, as she puts it, points of wonder—and in that way, without quite noticing it, it seems, Elda in herself is a point of wonder for us, writers who understand what it means to exist in a publishing world that is in many ways not yet ready for the multiplicity and complications and wonder of the kinds of stories we wish to write, but which in fact the world needs.

Mentorship is also the work of Kundiman—Kundiman is about providing a space for empathy for the writer’s work—in particular, the intangible labor and urgent work of Asian American art. What luck, what fortune does Kundiman have to honor today a publisher who is a lodestar for the best of all possible publishing worlds, an editor and a poet, a child of immigrants and a publisher of classics, a mother bringing up children of color in a future in which the survival of people of color will be the test of this nation’s humanity. Elda is a touchstone for the ways publishing can usher into the world stories that will allow our children to grow up slightly more hopeful about the possibilities of America’s democracy, this project of the future that is the present, the gift, that the work of Kundiman and the work of publishers like Elda Rotor provide. It’s my great honor to introduce you therefore to one of this night’s honorees, Elda Rotor, publisher of Penguin Classics. 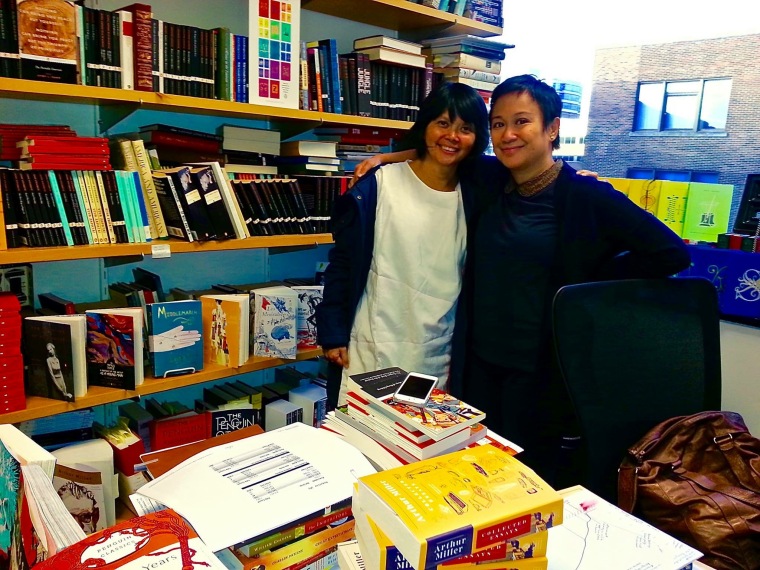 Elda (right) at her Penguin office.

At the Kundiman gala.